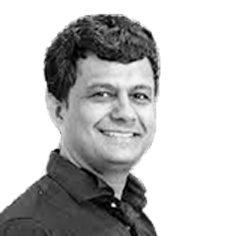 Atish Dabholkar  is an Indian theoretical physicist, currently the head of High Energy, Cosmology and Astroparticle Physics section at the International Centre for Theoretical Physics and Directeur de Recherche at the Centre National de la Recherche Scientifique (CNRS) at Sorbonne University in the "Laboratoire de Physique Théorique et Hautes Énergies" (LPTHE). He has been appointed as the next Director of the International Centre for Theoretical Physics for a five year term starting in November 2019. Well known for his research on string theory, black holes and quantum gravity, Dabholkar is an elected fellow [of the Indian Academy of Sciences. The Council of Scientific and Industrial Research, the apex agency of India for scientific research, awarded him the Shanti Swarup Bhatnagar Prize for Science and Technology, the highest Indian science prize awarded by the Prime Minister of India, for his contributions to physical sciences in 2006. He was awarded the Chaire d'Excellence of the Agence Nationale de la Recherche in France in 2007. He is also a recipient of the National Leadership award from the President of India in 2008.